This is the English summary of the 2020 Annual Report on Animal Experiments by Utrecht University and the University Medical Center Utrecht (UMC Utrecht). It provides information about the use of laboratory animals by the two institutions.

This publication was prompted in part by the Dutch Code for Transparency in Animal Testing. It is one of the many tools we use for being transparent about experiments on animals. For example, there are the very informative websites of the Animal Welfare Body Utrecht, the Animal Ethics Committee Utrecht and the 3Rs-Centre Utrecht Life Sciences.

At Utrecht University and UMC Utrecht, research in the life sciences (both veterinary and medical-biological) is carried out. Animal experiments are conducted in addition to experiments based on, for example, cell and tissue culture techniques, computer simulations and experiments on human volunteers. Laboratory animals are also used for education and training. All animal use is performed with great care, under supervision of the Utrecht Animal Welfare Body.

The Dutch Experiments on Animals Act (2014) stipulates that animal experiments may only be carried out if there is really no other option ("not, unless..."). That is, only if there is no animal-free way to achieve the same goal (Replacement). The point of departure is that animals can experience positive and negative emotions and have an intrinsic value. If animal use is inevitable, it is mandatory to see whether that animal experiment can be improved with respect to Reduction of the number of animals and Refinement by, for example, improvement of housing, supervision and procedures. This rule has been elaborated into a set of requirements and steps to take.

From idea to animal experiment 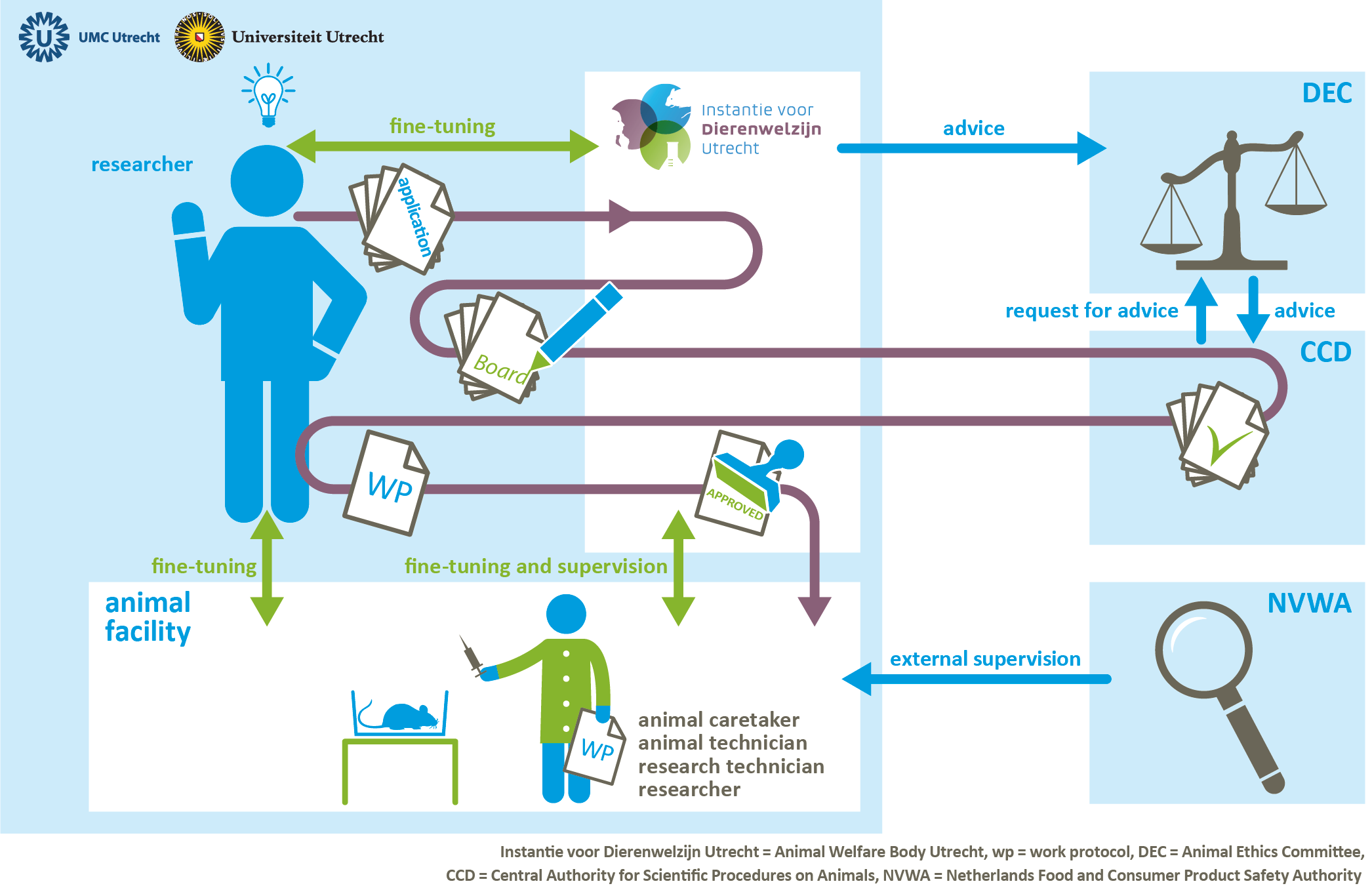 For each research project, the most suitable animal species is used. More than half of the experiments are conducted with mice. In addition to mice, rats and chickens were also frequently used, followed by cattle. Other animals used in experiments and education are zebrafish, pigs, birds (other than chickens), sheep, horses, rabbits and guinea pigs.

Discomfort is the legal term for all negative experiences that laboratory animals experience through animal experiments. It is mandatory to classify discomfort into the categories of mild, moderate and severe discomfort, or non-recovery (the animal dies during anesthesia having had no previous discomfort). A permanent effort is being made to keep discomfort levels as low as possible.

In mid-2019, a pilot was started in collaboration with animal welfare organizations to explore the options of rehoming rodents in a responsible manner, taking into account the safety, welfare and health of humans and animals. Most of the redundant rodents are bred as laboratory animals, but have not actually been used for animal testing. Genetically modified animals are excluded op grounds of legislation. The pilot was worked out positive. During the last months of the year, 155 mice and 2 rats found a new home. The pilot was continued during 2020.

Trend in the number of animal experiments

Over the period 2001-2020, the number of animal tests performed by Utrecht University and UMC Utrecht decreased from 51,900 to 20.433. Especially in the period 2010-2014, there was a considerable decrease in the number of animal experiments. Now that ‘quick wins’ in Replacement and Reduction of animal experiments are being applied, the decline is flattening out. For the year 2020, a slight increase can be seen.

Trend killed without being used

The number of laboratory animals killed without being used in experiments, like excess breeding animals, has been steadily decreasing since 2015, from 27,690 to 14,551 in 2020. During 2019, mouse breeds that were seldomly being used were stopped as living breeds. Some are preserved in the form of frozen cells or embryos. In 2020 a pilot for the rehoming rodents with the help of animal advocacy groups and under strict welfare conditions, was established as standing policy.